It’s mind over matter. Anything’s possible if you put your mind to it, the important thing is having a positive mindset.’ – Michael Lyddiard

‘When I tell people what happened to my arm, they sometimes think that’s my joke version of events, and assume I was born like that,’ Knox explained.

‘It’s a phone call you never want to get,’ his mum Kate remembered, when just before his 4th birthday Knox was involved in a ride-on lawn mower accident, ‘but so many opportunities that Knox has had may not have come about if he didn’t have his arm difference.’   Social media receive plenty of negative publicity, however, it has allowed Knox and Kate to connect with other families going through the same thing, who need or want to give advice or support.  ‘It’s being part of that community, where we can relate to each other in the same way,’ said Knox.

As well as sharing stories on Instagram, Knox has helped Aussie Hands with the Individual Capacity Building (ICB) Project, giving feedback on what information teenagers would find useful to access online. 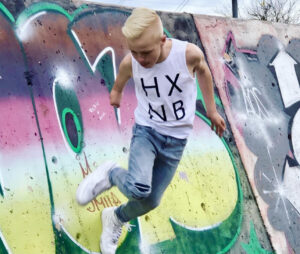 ‘As we have joined social media groups and people who are involved with modelling and acting, we were following Claire Bampton, the young dancer and Aussie Hands member, on Instagram,’ said Kate.  At the time, neither Knox or Kate realised Claire had a hand difference until Claire’s mum pointed it out, so he’s following someone who has something else in common with him.  Knox and Claire were hoping to meet up when they both did the same catwalk in Sydney last year, but unfortunately on the night things got a little too hectic.

When he was younger Knox had a myoelectric hand, but the rough and tumble of childhood meant it didn’t last long.  He moved onto a recreational prosthesis that can have different attachments screwed to it.  ‘I manage to do things without a prosthesis, but having one makes some things easier, for example when I’m riding a bike and want to do jumps,’ Knox explained.  They have an NDIS application in progress for a new myoelectric hand which medical professionals advise will minimise the chances of arthritis or strain on his other arm when he’s older.

As well as connecting through social media, Knox thinks teenagers would be interested in a movie night, to go bowling or somewhere like Holey Moley, the themed mini golf venues.  ‘If the focus is on an interactive, fun activity and you can talk at the same time, it’s less awkward than standing around trying to make conversation with people you have just met,’ suggested Knox.  We think this would help break the ice for any age group, not just adolescents.

Project ARI is a new podcast to help kids understand the importance of respect.  Knox had previously worked with the children’s book author, Nat Amoore, so when they needed a voice actor for this podcast, she suggested Knox audition for one of the roles.  She thought he would suit the character of Jeremy, a naughty kid who’s known for making sarcastic comments.  Although Knox is not mean like Jeremy, Kate says he does have a cheeky side which is probably where Nat saw the similarity.

During the 2018 Invictus Games (an international sporting event for wounded, injured and sick Servicemen and women) in Sydney, Knox was a junior reporter for the ABC and interviewed some of the competitors, including Nathan Parker, the 2021 NSW Young Australian of the Year, who has an arm like Knox.

At the games Knox was introduced to Michael Lyddiard, a former Sergeant in the Australian Army who lost his right arm below the elbow, his right eye and part of his left hand when a bomb exploded in front of him in Afghanistan.  Michael’s advice was: It’s mind over matter. Anything’s possible if you put your mind to it, the important thing is having a positive mindset.’

Michael was competing in various events including the long jump but suffered a hamstring injury earlier that day.  Having just met Knox, he somehow arranged with officials to let him jump on his behalf, and if that wasn’t enough of an OMG experience, Knox then got to keep the silver medal they won!  Just to demonstrate his positive and tough mindset, Michael then went on to run the 1500m the next day with his torn hamstring.

That experience has whetted Knox’s appetite to swim in the 2024 Paralympic Games in Paris or four years later in Los Angeles which would follow in the footsteps (or swim strokes) of Aussie Hands Patron and Paralympic swimmer Jessica Smith. Knox and Kate however do share Jessica’s view on sporting achievement: ‘Not everyone living with a disability who enjoys sport needs to go on to represent their country at the Paralympics…because this can create misplaced pressures on other disabled people to behave in certain ways and achieve certain markers of success.  That is unrealistic and unfair.’

To prepare for his ambitions, Knox now swims 6 times a week and competed at the Australian Age Championships on the Gold Coast in April this year.  He swims multi class – S9 or SV9 classification – which means the winner isn’t necessarily the one who touches the wall first, but based on what their time is in relation to that classification’s record time.  Diving in can sometimes cause problems with balance and Knox’s body tilts to one side before he hits the water, but he’s working with an exercise physiologist to help strengthen his shorter arm and improve his technique.

Through social media and acting networks, Knox was granted the lead role in a short ‘proof of concept’ film for Netflix last year.  It was produced in Toronto, so Knox and Kate got special exemptions to fly over during the Covid-19 pandemic.  A sign of the times saw production crew wearing masks and face shields, and everyone on set being tested every 2 days.  Knox and Kate haven’t seen the finished product and are waiting to hear if it gets the green light to be made into a longer film.  That’s why we can’t reveal the plot, but say that it would provide an interesting and powerful history lesson.

When Knox does find time to relax he likes to play Xbox, kick a footy with his mates, go for bike rides, listen to music and watch movies.

Thanks to Knox and Kate for taking time out of school holidays and swimming schedules to chat with Aussie Hands. You can help Aussie Hands continue to support aspirational member like Knox by making a donation.